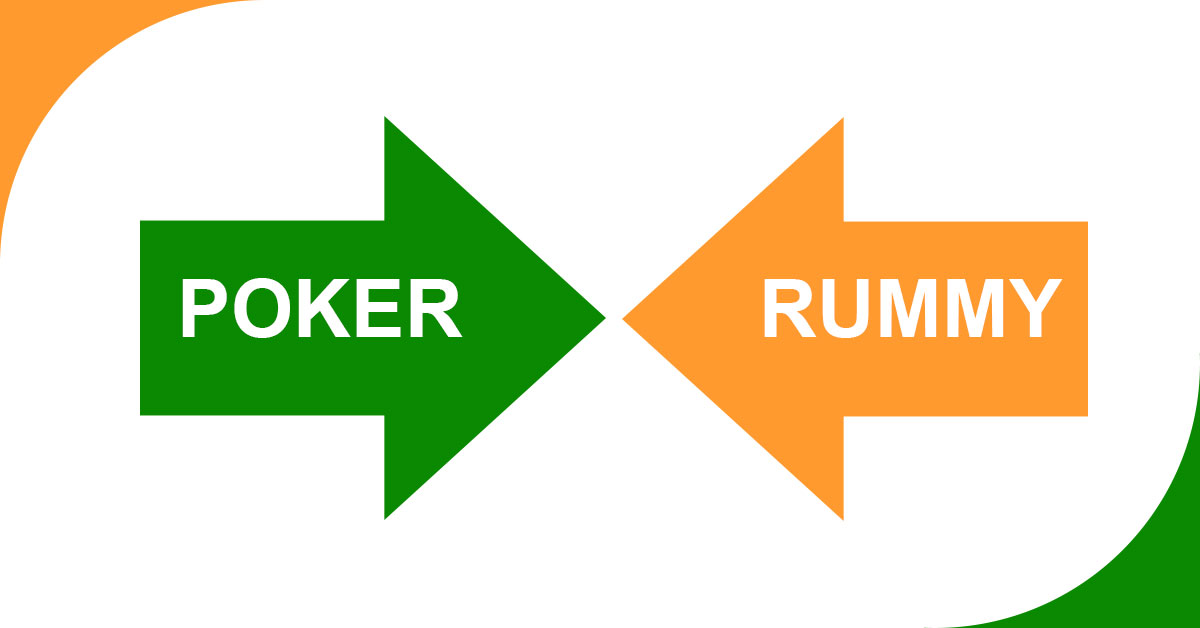 The most played online game in India is… rummy! Despite poker is slowly growing, following the regulation by some regions, rummy is still the flagship game for the country. Is there any similarity between poker and rummy, though?

Can these games be compared? We are going to try to sort these questions out in this article, but – spoiler alert – both games are super funny, social and well known in India, so it’s not a race, just a comparison based on gameplay, skills and social impact.

What are the differences between Poker and Rummy?

The gameplay is not comparable, but let’s try to draw some common lines:

Both poker and rummy use a 52 cards deck, at least in the most common variants. At least two players are needed in the game and the match is on after the cards have been dealt to every player involved at the table.

In both games a player involved in a hand can decide to drop (rummy) or fold (poker) at any moment if not interested anymore.

At the end of the hand, the player with the highest score has to show to other players his cards to claim the victory.

The rules cannot be compared either, requiring way different dynamics to score points, but they both are pretty easy to learn. It’s similar, though, a common saying for these types of card games: “they are very easy to learn, but very hard to master!”.

The fact that Rummy has been declared as a “skill game” by the Supreme Court is a good indicator of how much the skill does influence the outcome of the match. Licenses for operating poker websites in India have been issued on the same ground, but are there any difference in the skills required?

Calculation is everything in both rummy and poker. Analytical and mathematical skills are required to express an high level of the game, but maybe it could be said that in poker there’s a little more room for assumptions, while rummy is more relying on pure calculations and cards.

Keep track of the cards is important in both games, in terms of knowing which cards are yet to come out and hit the board
Put pressure on opponents is a skill way more needed in poker than rummy, given the second one – a matching card games – doesn’t have a betting system and sequence.

Also on this side, hard to tell which is the most exciting game; both can be played online or at home with friends and families and they both deliver an high degree of entertainment for a nice evening. When it comes to play online, many websites with regular license offer a nice, smooth desktop or mobile experience that can allow you to earn some money and have fun.

Now that indian online poker is growing and licenses being issued, the promotions and offers for playing this game seem to be a bit more competitive rather than the rummy’s ones. On average the deposit bonuses are higher on poker website and promotions tend to be better in terms of pure amount in INR, but the biggest difference is seen in guaranteed tournaments’ prizepool, which in some online rooms can peak around 75 Lakhs for main events.

Which game is the best? Impossible to tell. It really depends on whether you prefer an highly analytical game or a game where math and calculations do matter, but also instinct and cold blood are required to win big.

Regardless your choice, it’s good to know they are both skill games and the online offer is growing day after day, calling many enthusiasts to tell their skills with or against players from all over India.